is on the flyer below as a special sponsor. 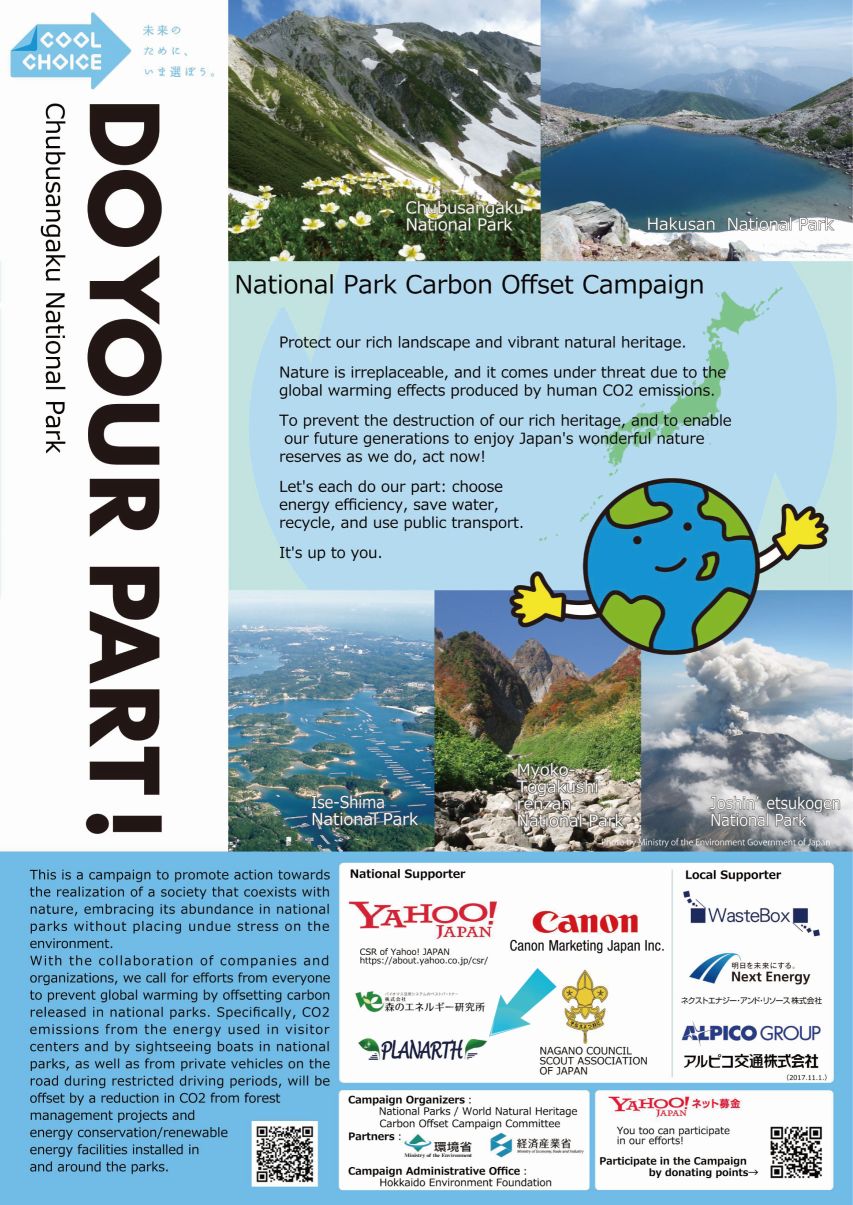 Since its establishment, PLANARTH GROUP has always held the basic stance to contribute to the improvement of the environment: starting from the certification of PLANET SUPRA and PLANET SUPRA NEO as carbon offset products from Japanese Ministry of Economy, Trade and Industry, we have also participated in carbon offset project of Ise-Shima G7 Summit in 2016.

As a new way to contribute to our planet earth, we have begun participating in carbon offset campaign of national parks and world natural heritage sites around Japan as a special sponsor.

Although it is uncommon for a small company such as ours to be a sponsor of a national project, due to our consistent efforts from the past, we were honored to be asked to participate in this campaign, along with other leading companies in Japan.

The campaign was actualized, owing to efforts and mutual cooperation by Ministry of Economy, Trade and Industry and Ministry of the Environment.

The fact that these ministries are each taking part and initiative in carrying out this campaign has caught a lot of attention, since it is rare to see different ministries jointly organize a campaign.

The considerable attention it is receiving indicates the high expectation that the government holds for this joint campaign to achieve significant results.

The activity of the campaign aims to raise awareness of environmental conservation through offsetting the carbon dioxide emitted from vehicles and surrounding facilities of national parks and natural heritage sites.

The catchphrase “Do Your Part!” was derived from the idea to call for each person to take part in making the environment better, in their own way.

A step by one individual may be small; however, the accumulation of these small steps leads to the change in the world.

The campaign will begin from Chūbu-Sangaku National Park in Nagano prefecture, to spread to national parks and natural heritage sites throughout Japan.

It is further planned to spread to heritage sites around world, and PLANARTH GROUP will continue participating in all of them as a special sponsor.

With heightening interests in environmental conservation and eco-friendliness, many companies pay attention to their CSR activities, and some are still searching for ways to effectively carry it out.

That our main products are government certified carbon offset products and that the manufacturer participates in governmental campaign, could be one of the ways to appeal to those companies.

Please visit the official website for the detailed information about their Carbon Offset activities.